Recent proposals to reform the tax treatment of US multinationals would increase US revenues substantially, according to an analysis by the Tax Policy Center. The global intangible low-tax income (GILTI) reform proposed by the House Ways and Means Committee and the OECD/G-20 “Pillar 2” global minimum tax are quite similar, but the committee proposal would raise roughly $100 billion more over 10 years. Moreover, the effective tax rate on foreign-source income would meet the target for minimum taxes set by the OECD and G20.

But, if Congress chooses to retain the current 21 percent corporate income tax rate, the committee reform would generate about $100 billion less than a reform based on Pillar 2, and the effective tax rate on foreign-source income would be below the OECD/G20 minimum rate.

The Ways and Means GILTI reform has the following major features: It would raise the statutory corporate income tax rate from 21 percent to 26.5 percent, while lowering the GILTI income deduction from 50 percent to 37.5 percent. Together, these measures would raise the US effective statutory rate on foreign-source income from 10.5 percent (21*(1-.5)) to 16.5625 percent (26.5*(1-0.375)).

Two further measures would significantly increase GILTI revenues: Pooling of foreign profits, losses, and FTCs, currently allowed across all foreign jurisdictions, would be calculated on a “country-by-country” basis. And, the exclusion from the GILTI tax base of a 10 percent return on foreign qualified business asset investment (QBAI) would be reduced to 5 percent.

The OECD base erosion and profit shifting (BEPS) Pillar 2 global minimum tax would work differently. The minimum tax rate on worldwide income would be 15 percent (although higher rates are allowed). The “carveout” amount—similar to QBAI—would begin at 10 percent of payroll plus 8 percent of tangible assets and phases down to 5 percent of each over 10 years. Like the proposed GILTI reform, Pillar 2’s profit, loss, and foreign tax credit pooling would be calculated on a country-by-country basis. Unlike GILTI, however, Pillar 2 would not impose a haircut on foreign tax credits.

Given its tighter parameters, the Ways and Means GILTI reform would raise more revenue from foreign-source profits of US multinationals than Pillar 2. Based on the Internal Revenue Service’s country-by-country data, TPC estimates that the GILTI reform would yield about $100 billion more over the next decade than if the United States simply complied with the Pillar 2 agreement. This is equivalent to a revenue difference of about 0.03 percent of GDP per year.

While the proposed GILTI reform would impose a higher tax burden on all foreign jurisdictions than Pillar 2, the two regimes’ country-specific revenue patterns vary due to their different designs. Notably, the revised GILTI excludes from income a certain return to tangible assets (reduced from 10 to 5 percent), while Pillar 2 excludes a fraction of both tangible assets and payroll. 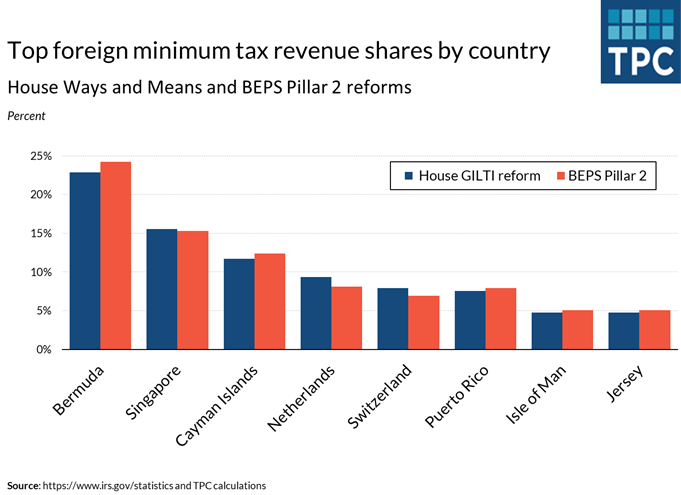 The two exclusion formulas reflect different policy concerns. GILTI’s primary goal is to capture excess profits generated by US intellectual property held offshore. While Pillar 2 shares that objective, its payroll-based exclusion also seeks to avoid burdening real investment in countries that use below-average corporate tax rates to attract capital but do not otherwise function as tax havens. This feature addresses the concerns of several European countries, including Ireland and Hungary.

The 140 countries that endorsed the OECD/G-20 Inclusive Framework would not be required to adopt Pillar 2. However, countries who do would be expected to comply with BEPS minimum standards.

Although GILTI inspired BEPS Pillar 2, it is not clear whether its current form meets BEPS minimum standards. GILTI’s relatively low effective rate and worldwide pooling are more lenient than the final Pillar 2 blueprint. Since the Ways and Means GILTI reform—combined with a higher corporate income tax rate—would raise the effective tax rate above 15 percent and adopt country-by-country pooling, it would presumably comply with BEPS.

At this time, however, an increase in the US corporate income tax rate seems less likely than a few weeks ago, when Ways and Means voted for the reconciliation provisions. If the corporate rate remains at 21 percent but all other GILTI reform proposals are enacted, estimated revenues for the GILTI reform would fall by about $200 billion over the next decade. And with an effective tax rate of 13.125 (21*(1-0.375)) percent, the proposal’s effective tax rate would rise but remain below the BEPS minimum.

Even without a corporate income tax rate increase, adopting the GILTI base broadening measures proposed in the Ways and Means draft can raise significant revenue and move the US closer toward the OECD/G-20 BEPS Pillar 2 minimum standards. To hit the 15 percent Pillar 2 minimum rate, the GILTI deduction would have to be reduced to 28.6 percent (approximately 1-15/21).