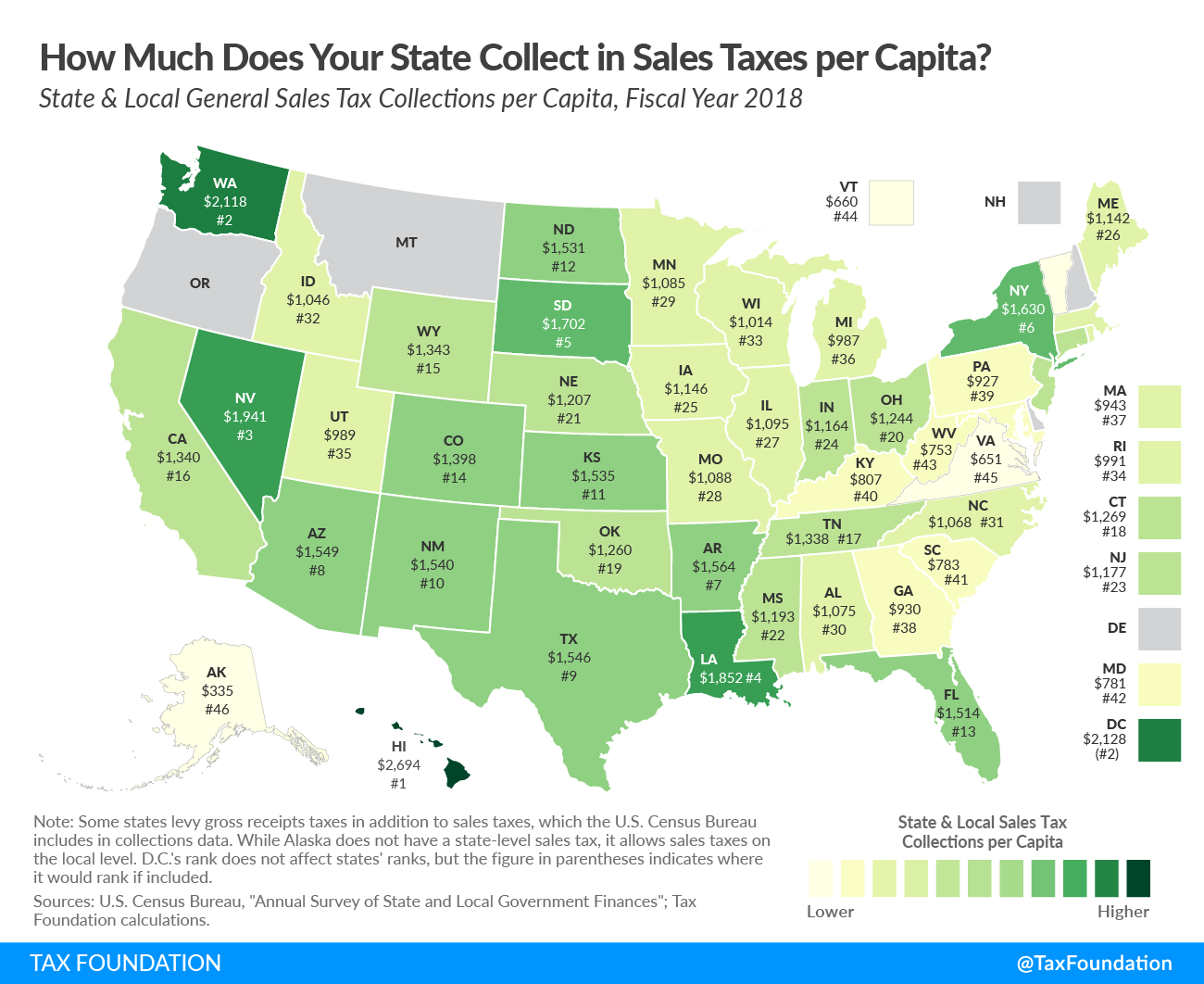 In fiscal year (FY) 2018, the highest state sales tax collections per capita were found in Hawaii ($2,694), the District of Columbia ($2,128), Washington ($2,118), Nevada ($1,941), Louisiana ($1,852), and South Dakota ($1,702). Hawaii and South Dakota have broad sales tax bases that include many services, contributing to those states’ high collections per capita. Both states’ sales tax bases, but particularly Hawaii’s, capture many business-to-business transactions instead of just final consumer goods and services. That creates harmful tax pyramiding, where the sales tax is embedded in the final price several times over as imposed at multiple points during the production process.

Narrow sales tax bases reduce collections, but more importantly, they make the tax less neutral and less economically efficient. Many states exempt certain goods (like groceries or clothing) from the sales tax for political reasons, while they exclude many consumer services (such as dry cleaning, haircuts, or tax preparation) largely by historical accident. Most states instituted their sales taxes during the Great Depression era, where services made up a much smaller portion of the economy. Since then, the portion of total U.S. personal consumption dedicated to services has grown significantly, while purchase of goods has declined. This trend has contributed to the erosion of states’ sales tax bases over time, an unintentional base-narrowing that puts upward pressure on sales tax rates.

Broader sales tax bases address an important equity concern, as services, which are currently mostly exempt, tend to be consumed disproportionately by higher-net-worth individuals, and their exclusion makes the tax more regressive. Curiously, a policy expressly designed to inject progressivity into sales taxes—an exemption for groceries—largely fails to accomplish its purpose. Studies suggest that the exclusion of groceries beyond the required exemption for food purchased using SNAP or WIC does not actually favor lower earners.

Rightsizing a state’s sales tax base can not only make the tax more equitable and better align it with the modern economy but also generate revenue that can be used to pay down the rates of more harmful taxes. That is why sales tax base broadening, which is favored by public finance scholars across the political spectrum, features in many tax reform plans.

Note: This map is part of a series on state and local tax collections per capita.

Facts and Figures: How Does Your State Compare?