Per tradition in Washington, D.C., every week is infrastructure week, but currently, this joking description holds especially true. Since President Biden unveiled his administration’s proposal for increased infrastructure spending in the American Jobs Plan, debate over how to fund investments in infrastructure has taken center stage. A similar discussion is happening in many states, where lawmakers are grappling with questions over the future of infrastructure revenue and spending.

Traditionally, revenue dedicated to infrastructure spending has been raised through taxes on motor fuel, license fees, and tolls, but revenue from motor fuel has proven less effective over the last few decades. Between developments in vehicles’ fuel economy, increased sales of electric vehicles, and inflation, taxes on motor fuel generally raise less revenue per vehicle miles traveled (VMT) than they did in the past. As a result, most states contribute revenue from other sources to make up differences between infrastructure revenue and expenditures.

The amount of revenue states raise through taxes on infrastructure and transportation vary to a significant degree—as do the sources. Four states (California, Indiana, Montana, and Tennessee) raise enough revenue to cover their highway spending, but 46 states and the District of Columbia must cover the difference with tax revenue from other levies. Alaska (17 percent) and North Dakota (29 percent), which both rely heavily on revenue from severance taxes, raise the lowest proportion of highway funds from transportation taxes and fees. 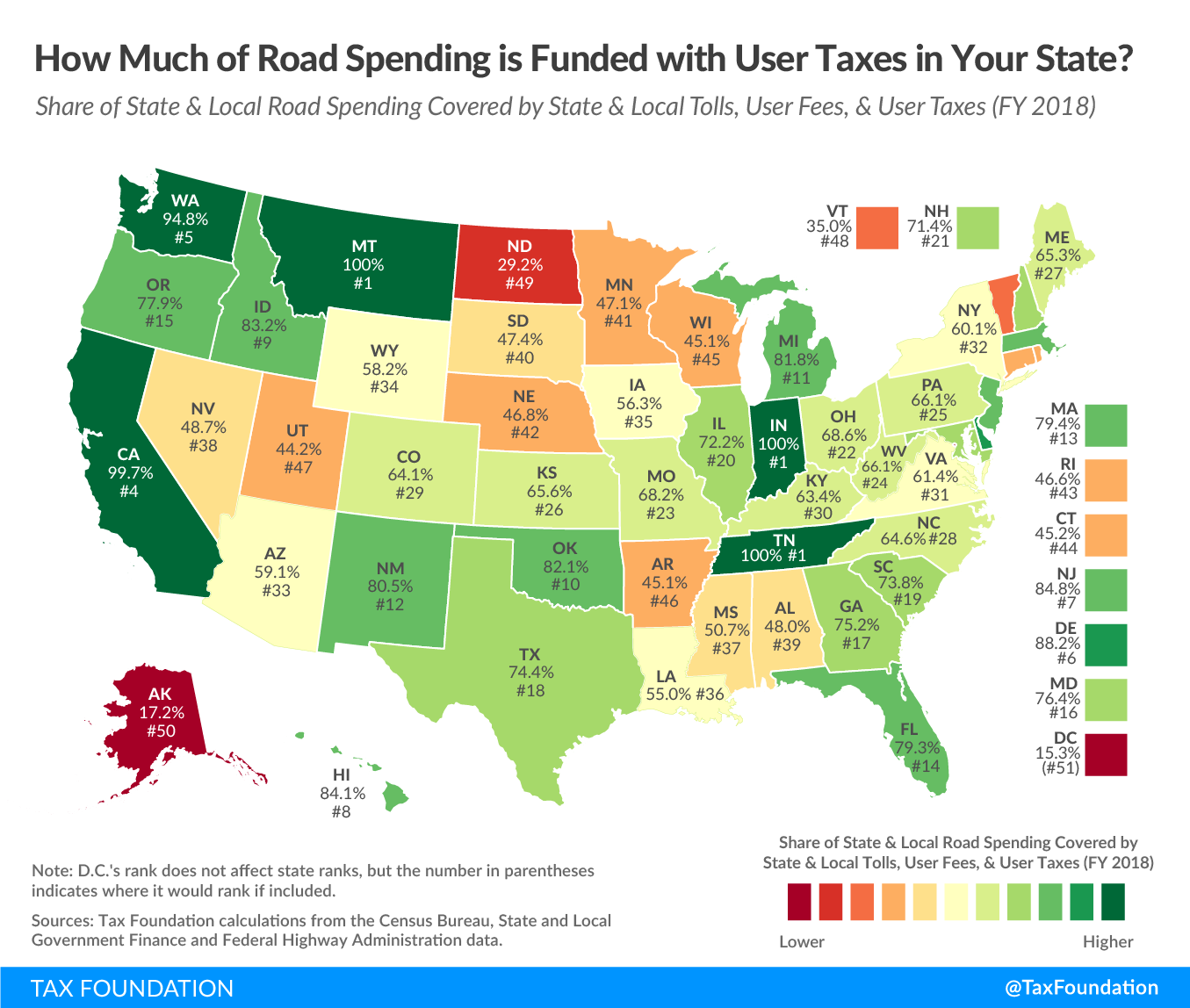 States that cannot rely on the oil and gas industries for funding have tried a variety of funding sources to come up with the money necessary for infrastructure upkeep. Though politically unpopular, motor fuel taxes, license fees, and tolls are all relatively good applications of the benefit principle—the idea that the people paying the taxes and fees should be the ones to benefit from them. States should seek to fund infrastructure through user taxes and fees as much as possible, internalizing the costs associated with using the state’s transportation systems.

However, with the sustainability of established motor fuel taxes increasingly threatened, it may be time for lawmakers at both the state and federal levels to consider other options for transportation revenue. One such option is a vehicle miles traveled (VMT) tax. Instead of using fuel as a proxy for road usage, taxing actual road usage would better respect the benefit principle and guarantee that the tax acts as a user fee.

A few states have already begun pilot programs to study the feasibility of VMT taxes, and Pennsylvania Gov. Tom Wolf (D) recently announced a commission to study phasing out motor fuel taxes. On both a federal and a state level, imposing a VMT tax does require lawmakers to make some hard decisions on trade-offs. Significant concerns regarding privacy must be addressed and balanced against a desire for a targeted, equitable, and efficient tax.

For a more detailed breakdown of where states’ user-based road funding comes from, check out the following table.