In 2020 and 2021, Congress enacted three rounds of economic impact payments (EIPs) for direct relief to households amidst the pandemic-induced downturn. Survey data from the U.S. Census Bureau indicates that households increasingly saved their EIPs or used them to pay down debt rather than spend them.

About 90 percent of tax filers and millions of non-filers qualified for the three rounds of EIPs, administered by the Internal Revenue Service (IRS) and costing about $867 billion in total according to the Joint Committee on Taxation (JCT). Most payments have been sent out—the Committee for a Responsible Federal Budget has tracked that $811 billion of direct payments has been disbursed. The IRS is in the process of sending out the third round of payments. Some people may not get their full payments until they file their tax return. The IRS provides certain tools, such as the Get My Payment tool, for assistance.

Overall, the $867 billion in direct payments, combined with the trillions of additional relief dollars enacted by Congress, prevented a drop in and actually increased personal income during the economic downturn.

The following chart illustrates how overall measures of personal income, personal consumption expenditures, personal saving, and government social benefits to persons changed from January 2020 through May 2021. Note that the amounts are shown in seasonally adjusted annual rates. From the U.S. Bureau of Economic Analysis (BEA) data, it appears that the EIPs, which began to hit bank accounts in April 2020, helped reduce a drop in consumption and may have amplified the increase in saving. In the time between rounds of economic relief, consumption and saving started returning to trend, but saving continued to jump by more and remain above trend with subsequent rounds of relief. Data from a household survey conducted by the Census Bureau largely align with the aggregate data from the BEA and can help inform how households used, or planned to use, their direct payments. 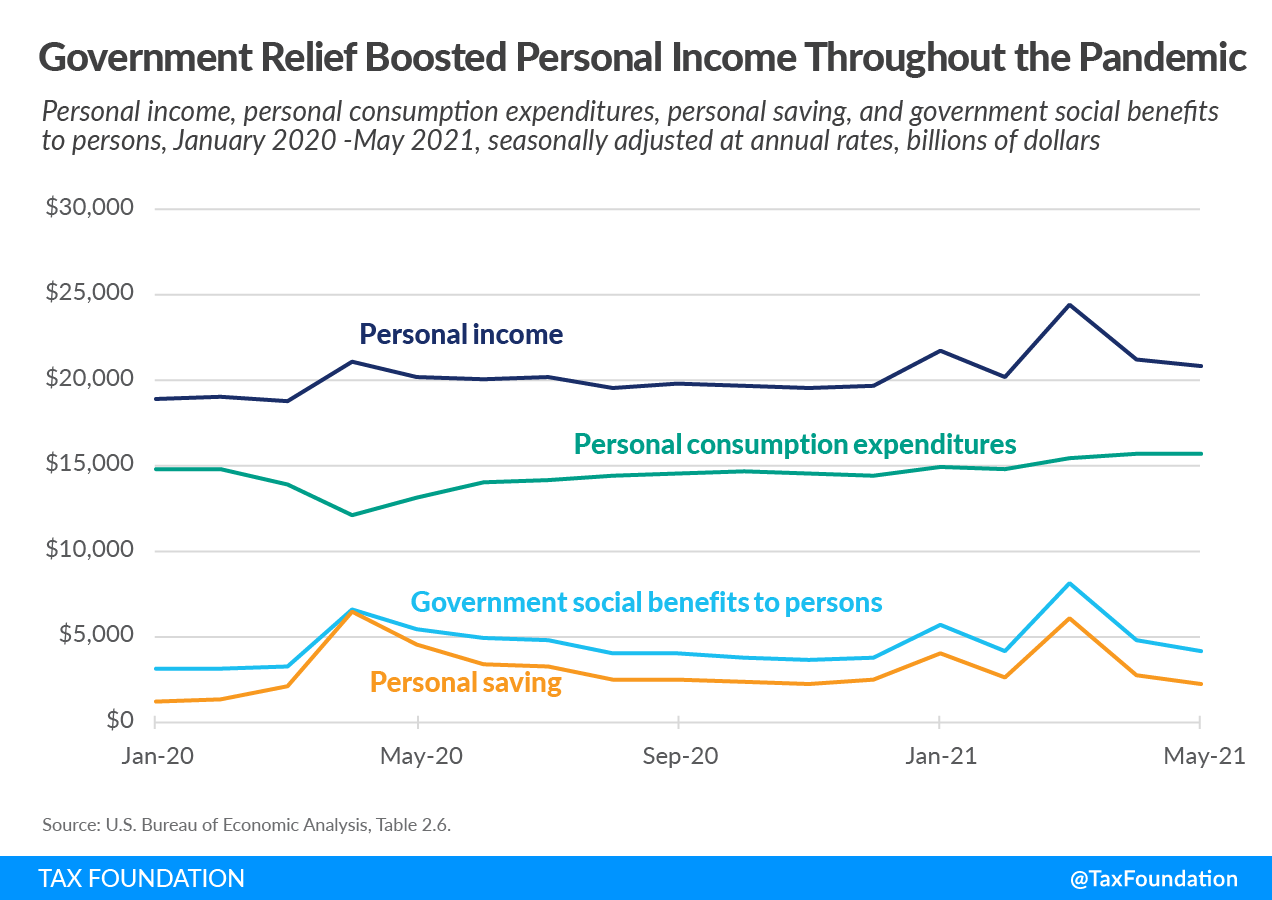 According to the household survey, a larger share of the first round of EIPs went toward spending than the second and third rounds. Of the households that reported receiving the first round of payments, 75 percent responded that their EIPs would be mostly spent, while just 11 percent responded mostly saved. The share of households mostly saving their payments increased to 26 percent in the second round and 32 percent in the third round, while the share of payments mostly spent decreased.

A growing share of payments was also used by households to pay off debt. Initially, 14 percent of households indicated they would use the first round of payments to pay off debt, a share that grew to 50 percent in the second round and 52 percent in the third round. It should be noted that in the second and third round survey, a significantly larger share of respondents (35 percent) indicated they had not yet received their payments as compared to the first round (15 percent). 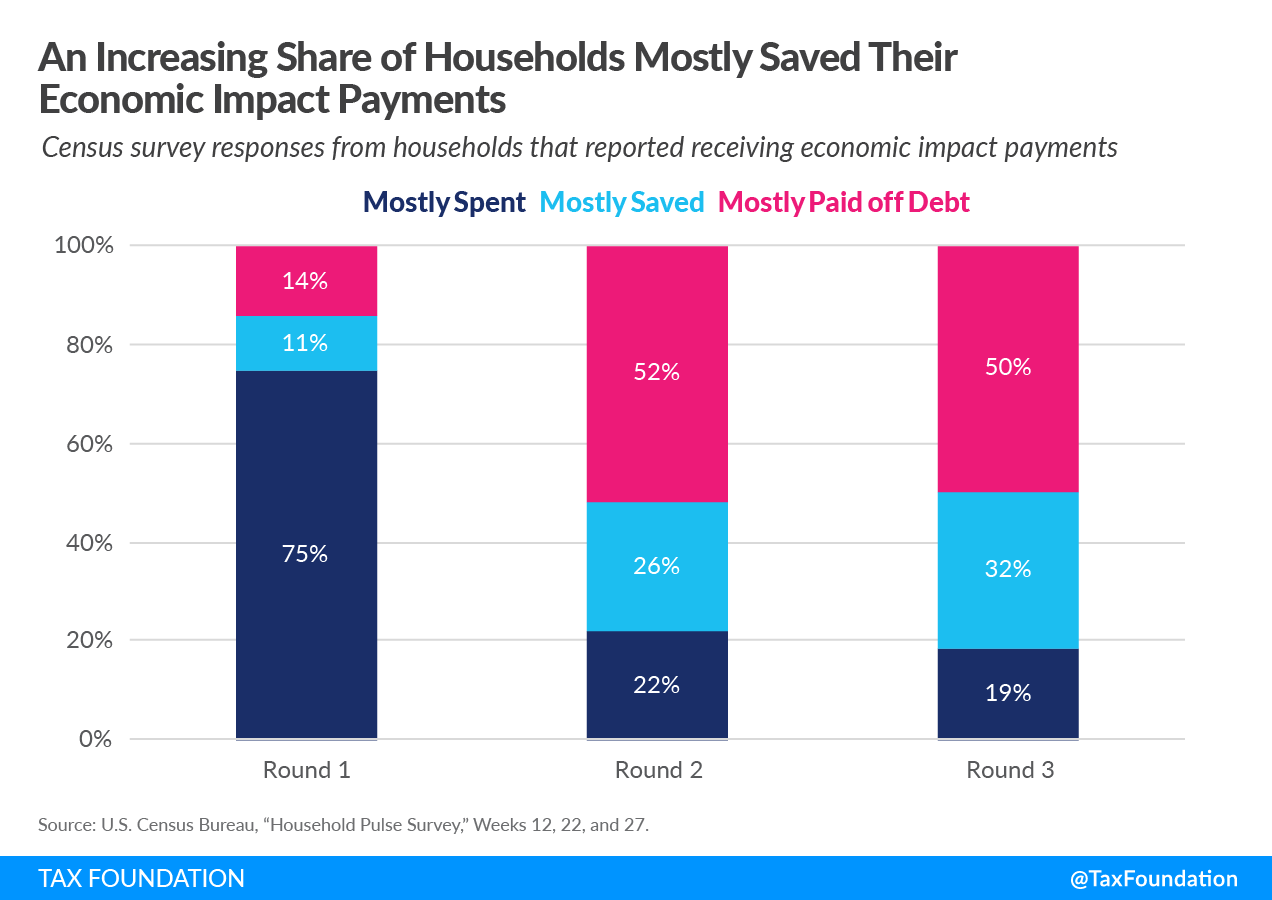 While the same pattern of spending more of the first round and saving more of later rounds was true of each income group, some patterns were more pronounced in certain income groups. For example, in the first round of payments, 84 percent of households with less than $50,000 in household income said they spent their payment, compared to 56 percent of households reporting more than $200,000 of income. By round three, 18 percent of lower-income households mostly spent their payments, compared to 20 percent of higher-income households. In the second and third rounds, using the payments to pay off debt was the most common reported use for households making under $200,000.

The data suggests that the combination of economic impact payments and other relief programs prevented personal income from dropping even as the economy shrank during the coronavirus pandemic. During the early months of the pandemic, more of the direct relief was used for household spending, especially by lower-income households, while later rounds of payments were primarily used for saving or paying down debt.