Second, Biden also wants to tax the capital gains of millionaires at ordinary income tax rates, which would be levied at his proposed top marginal rate of 39.6 percent. Added to the NIIT, it would mean a combined top tax rate on capital gains of 43.4 percent, compared to 23.8 percent today.

In addition to taxing unrealized capital gains at death at ordinary income tax rates, large estates would also be subject to the current estate tax of 40 percent above an exemption of $11.7 million per person.

As the accompanying table illustrates, for an asset worth $100 million (all of which is a capital gain for the sake of simplicity), the two changes would mean an immediate capital gains tax liability of $42.9 million at the time of death. Upon paying the capital gains tax at death, the value of the $100 million asset falls to $57 million for the purposes of the estate tax. After subtracting the $11.7 million exemption, the 40 percent estate tax rate is levied on the remaining $45.3 million in assets to produce an estate tax bill of about $18.1 million. 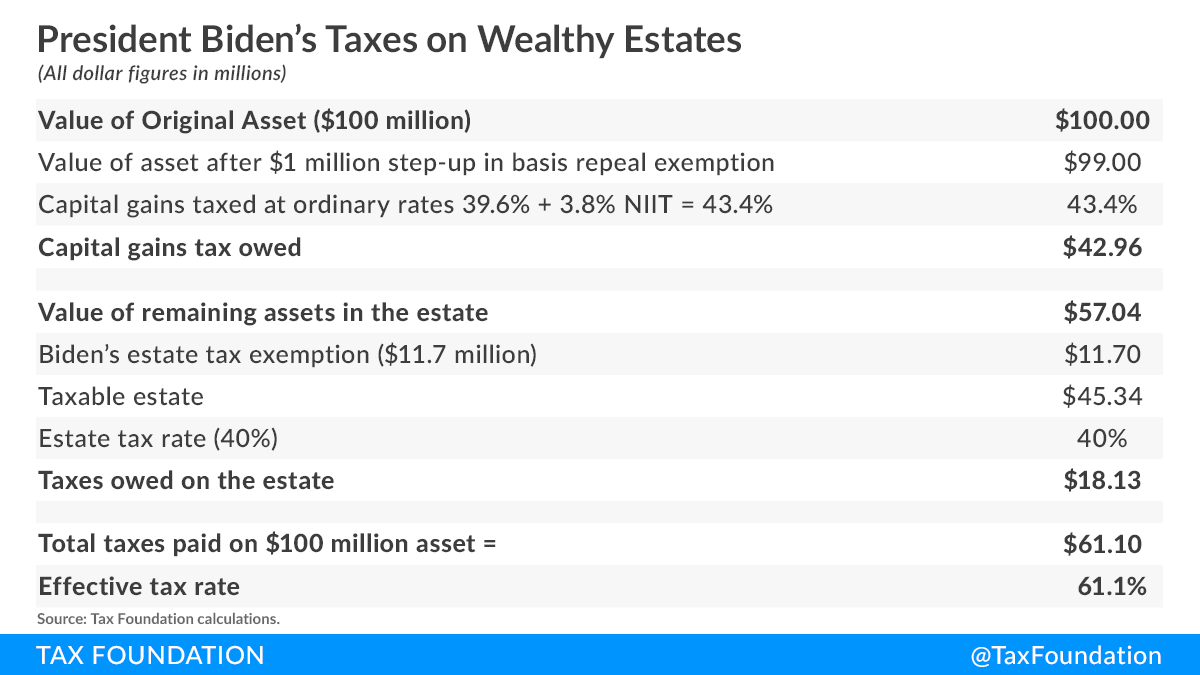 By historical standards, Biden’s plan to tax unrealized gains at death and levy the estate tax at the same time is quite unique. Traditionally, estate tax law has allowed for a “step-up” in the basis of transferred assets so that they were not hit by the capital gains tax and the estate tax at the same time.Combining both taxes results in a total tax liability of $61.1 million on the original $100 million asset, for an effective tax rate of 61 percent. The tax rate under Biden’s proposal is nearly twice the effective tax rate that the same asset would face today under existing tax rules.

When the estate tax was repealed for one year in 2010, the step-up was also repealed, which meant that heirs did face tax liability on any gains when they sold inherited assets.

However, the impact of the step-up’s repeal was mitigated somewhat for smaller estates by a provision that exempted “$1.3 million of an estate’s increased value from the capital gains tax and $3 million for transfers to a spouse.” Even though some heirs did pay higher capital gains taxes on the assets they inherited in 2010, Congress has historically understood that it was bad policy to levy a capital gains tax and estate tax on the same assets.

Of course, most economists agree that both the estate tax and capital gains taxes already amount to a second or third layer of tax on the same income. In the case of corporate stocks, capital gains (and dividends) are second layers of tax on corporate profits that were already taxed by the corporate income tax. Estate taxes are levied on assets that were purchased with after-tax income and on assets that may already have been taxed, as might be the case with stocks or corporate bonds.

Increasing the top capital gains tax rate to 43.4 percent alone would mean high-earning taxpayers may face tax rates north of 50 percent on capital gains when including state taxes. Taxing unrealized gains at death while still levying the estate tax further compounds the total tax burden on saving and investment, which may be the highest tax burden on capital gains seen in nearly a century.

Rather than penalize productive activity further, tax policy that encourages greater economic growth is a better path ahead for U.S. tax policy.